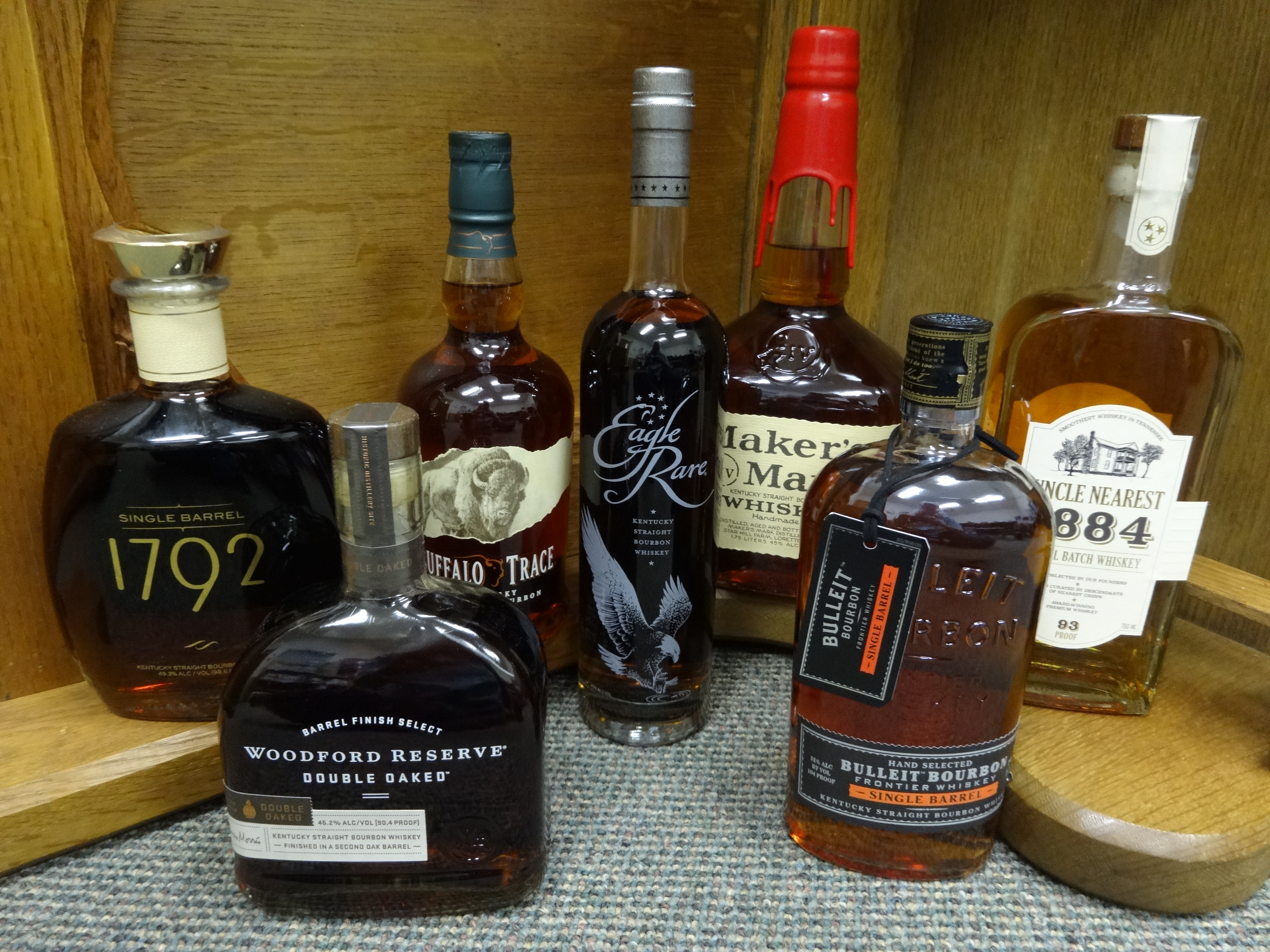 A fabulous collection of premier, and hard-to-find brands are perfect for your own personal blind-bourbon-tasting with friends. • 1792- This “high rye” content bourbon, with hints of caramel and vanilla mixed with spice, has an elegant flavor profile. Only barrels determined to be exceptional are bottled individually. • Buffalo Trace – The story is almost as good as the bourbon! “Ancient buffalo carved paths through the wilderness that led American pioneers and explorers to new frontiers. One such trail led to the banks of the Kentucky River where the Buffalo Trace Distillery has been making bourbon whiskey the same way for more than 200 years.” In tribute to this, Buffalo Trace was created. Flavors of brown sugar and spice are followed by deepening hints of oak, toffee, dark fruit and anise. It has a smooth and lingering depth and received a 2020 World Whiskies Gold Medal. • Eagle Rare - This 10-year old Bourbon is sweet and oaky, best served neat. It has been aged in virgin American white oak and is rumored to be aged more than the promised 10 years. It tends to fly off the shelves and most “Aunt Betty Carol” stores limit purchases to one bottle per customer while limited supplies last. • 1884 – This whiskey was created to honor the “Godfather of Tennessee Whiskey” Nathan “Nearest” Green. It’s nice to have something representative of the first African American distiller and compare this small batch with the Kentucky bourbons. Today, the distillery is operated by his great-great-granddaughter who has kept his legacy alive with this brand. 1884 is a light bodied whiskey as compared to the fuller bodied bourbons you may be used to, but it is delicious. With notes of smoked wood and agave-like sweetness, consider it as a first serve, or a desert whiskey! • Maker’s Mark – The making of this handmade Kentucky Straight Bourbon spans several generations of the Samuels family. This small batch whisky (Scottish spelling) is bottled at 90 US proof and sealed with classic red wax. It is aged around six years. It is unusual in that no rye is used as part of its mash. The distillers rotate the barrels from the upper to lower levels of the warehouses during the aging process to make sure that all barrels are exposed to the same temperature variations and the taste will be uniform throughout. The distiller was awarded a 2021 Double Gold Medal by the San Francisco World Spirits Competition. • Woodford Reserve Double Oaked – The twice barreled bourbon has a rich and colorful flavor as it is aged in separate, charred oak barrels. The second barrel is “deeply toasted before a light charring” and this gives the delightful and subtle sweet oaky flavor. With notes of vanilla, caramel, fruit, honeyed apple, hazelnut, and spices, the 90.4 proof has consistently placed in the top of whiskey competitions. • Bulleit Single Barrel - Kentucky straight bourbon whiskey from the Bulleit Distillery in Lebanon and Shelbyville, Kentucky.  Characterized by a high rye content (28% of the mash bill) and aged at least six years, it has a bold, spicy character with a finish that is long and dry with a light tasting toffee flavor. At 90 proof for the US market, this bourbon is highly desirable and sells out quickly!